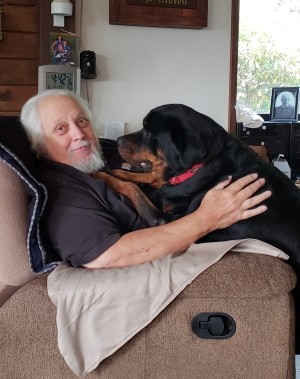 Shawn S. Ferrell, 65, of Yachats lost his battle with cancer on March 30th, 2020. Shawn was born on August 11, 1954 in Van Nuys, CA to Russ and Barbara Ferrell. Shawn spent his childhood in Southern California but did live in Mexico for 2 years while his father finished up college. Shawn graduated from William S. Hart High School in Newhall, CA (now known as Valencia) in 1972. He was a member of the local van club and managed a local dive shop where he taught scuba lessons and even got to go on a dive with Jacques Cousteau.
In 1981, Shawn married and relocated to Oroville, CA, where he started a family. He also owned and operated Spades Vinyl Specialties where he manufactured waterbed mattresses, and also owned and operated Sunrise Products where he manufactured Corvette Parts. He was also very active in the Butte Sailing Club and enjoyed sailing out on the Forebay as much as possible.
In 1996 he relocated to Yachats, OR to help his parents in their later years. Shawn was very active with the local Lions Club and later involved with the Moose Club as well. He was a jack of all trades, he did handyman work around town and was even known to get called as the unofficial locksmith when someone locked themselves out of their car/house. He also worked at the Silver Surf for many years before being forced to retire due to his health.
Shawn loved to help people. He also loved to fish and crab, ride his motorcycle and grab some beers with friends. He rode his motorcycle as much as possible, even getting stuck at a bar waiting for the rain to pass.
Shawn is survived by his daughter Megan Miller, her husband Tim; his grandchildren Trinity and Terrance Sumahit, four bonus granddaughters Ally, Emmy, Maddy and Anna; his cousin George MacDougall, his wife Deann; his uncle Patrick Ferrell, his wife Connie; his aunt Barbara Toll, his cousin Wendy Greene; and many friends that he considered family. He will be greatly missed.
A celebration of life will occur at a later date.

To plant a tree in memory of Shawn S Ferrell, please visit our tribute store.

You can still show your support by planting a memorial tree in the memory of Shawn S Ferrell
Share a memory
© 2020 Bateman Funeral Home. All Rights Reserved. Funeral Home website by CFS